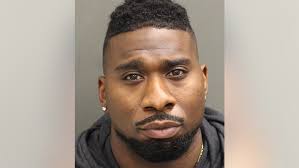 A shocking video was released this week that showed former NFL Zac Stacy violently abusing his now ex-girlfriend, Kristin Evans. Stacy was arrested but has now been released from jail on a $10,000 bond.

On Saturday, the ex NFL was released out on bail by a judge that ordered Stacy to stay away from Evans. The judge also ordered that he surrender his passport, and any firearms following his release. The Attorney for Stacy, Thomas Luka made a comment on the case saying, Obviously, this is a very serious charge. My hope is when we see the full record, we’ll have a much more clearer picture on the events that occurred.”

The video from the security footage has been used as evidence in court and to determine  the judge’s decision. Stacy’s attorney argued the footage only showed parts of the incident, claiming, “We don’t know if that’s the full video,” the attorney claimed. “All I know is there’s 53 seconds of video. We don’t know where that started, where it began and where it ended.”

Former girlfriend Evans did share via Instagram that she wasn’t happy with the way the Judge rules in the case.