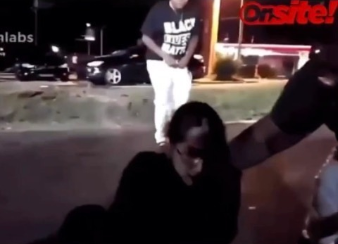 A woman involved in an Atlanta protest for Rayshard Brooks Friday was shot near the Wendy’s where Brooks was killed.

Per video captured by a witness, the Juneteenth protest was peaceful until multiple shots rang out, sending participants into a frenzy.

In the video, the woman can be seen running away from the gunfire before falling and screaming in pain. A man off-camera said the bullet barely missed him before striking her.

The woman shot was conscious throughout the video. TMZ reports her injuries were “non-life-threatening,” and that she was taken to a hospital.