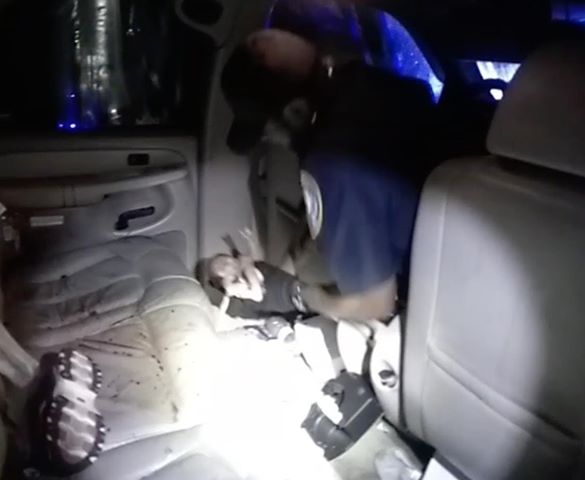 During the very early hours of a wet Monday morning, Krystal Jones’ daughter Crystan Graham went into labor, so she decided to drive her daughter and 1-year-old granddaughter to the hospital. On the way there, her car hydroplaned and they crashed into the gate of the BAPS Hindu Temple near Atlanta, Georgia. When they finally came to a stop, Graham could not find her newborn baby.

Luckily, for the three generations of women, three cops were driving by at the same time. Lilburn police officer Danny Bride was the first one to approach the new mom, and he asked them, “Where was the baby at?”

“We don’t know,” adding, “I was just trying to get to the hospital.”

At that point, Bride, along with officer Cepeda Huff and Sergeant Matt Madden, started looking for the infant outside of the car in the dark because of all of the windows were smashed. They were afraid that the baby was lost in Georgia’s red clay in the darkness.

Then by some miracle, Officer Huff decided to look in the backseat of the car. That is when he says, “And that’s where the baby laid right into a little pocket. And that’s where I found her.”

He scooped up the tiny baby and brought her the nearby ambulance. As the officer was walking her over to the ambulance, she grabbed his finger.

EMS rushed the little girl to the hospital, and she remains in NICU. According to WAGA, Cea Anderson weighed 3 pounds 9 ounces when she was born.

When it comes to the police officers, Jones called them all angels. Bride remained humble as he described his angelic moment as “It’s a great way to end a shift and it’s just about being in the right place and the right time.”