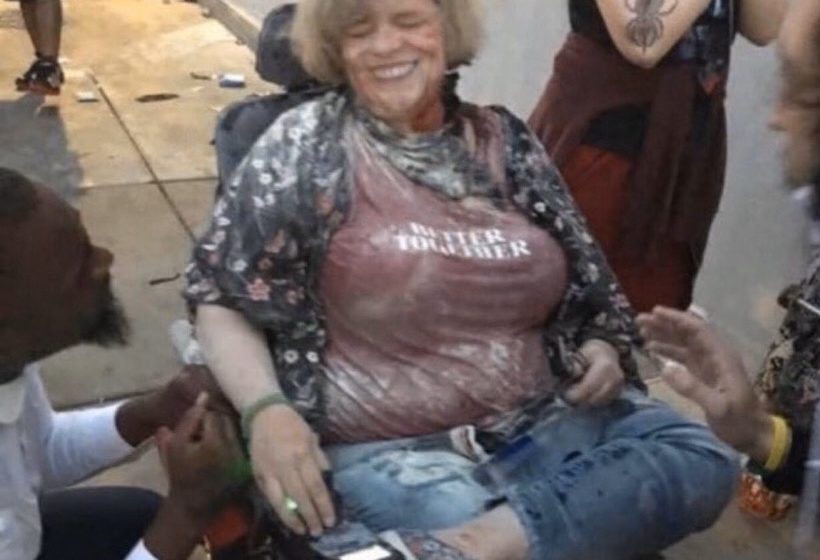 A knife-wielding white woman, referred to as Jennifer, allegedly faked being handicapped in attempt to garner sympathy while trying to stop looters during the Black Lives Matter protest in Minneapolis, Wednesday night.

Per footage of her antics, Jennifer—a seemingly elderly woman maneuvering a motorized wheelchair—is seen being manhandled and sprayed with fire extinguisher fluid as she barricades the entrance of a Target, holding off rioters from entering.

While the initially troubling sight seems inhumane, a second video shows the same purportedly disabled woman leaping out of her wheelchair and threatening protestors with a knife.

Naturally, Twitter couldn’t resist laughing at the woman’s sad attempt at “look what they did to little ol’ me” greatness.

Video captured earlier of the elderly wheelchair-bound woman who was attacked at the Minneapolis Target during the BLM riot. In a later interview, she said she was trying to do her part in stopping the looting. She was beat on the head & sprayed in the face w/a fire extinguisher. pic.twitter.com/EpcAAF0HLY

it was a peaceful protest. they wanted justice. this woman is not old, she’s 30 and she can walk. they saw her hitting someone and then she went back to her chair. she tried to stab people. don’t believe everything you see on the internet. https://t.co/mpwxZNGbVW

she’s 30, she can walk and she let the white women go but tried to stab the black ppl lmfao https://t.co/HTqpKINc7f

the fact that she’s 30 and SHE CAN WALK are trending, im screaming. its 4 am and i cant sleep from laughing pic.twitter.com/FA5aWR6vn7

Only one person can stop Jennifer at the next target pic.twitter.com/SR1GhP9Yrq

1. She’s not elderly, she’s 30.
2. She’s NOT handicapped, got out of her chair and walked over to hit someone, and then back to her chair (see photo)
3. She showed up stabbing blacks to keep them out of the store,but allowed whites to walk by unbothered. pic.twitter.com/K9Bv3VvTWZ

Jennifer when she heard the niggers started looting target pic.twitter.com/50MZfOlb9X

Jennifer after a long day of stabbing people at target pic.twitter.com/sI7YnxKgP8

The looters at the target tagging Jennifer ass pic.twitter.com/uT3HtiBuxa

jennifer pulling up to target after hearing about the riot pic.twitter.com/5wJizy6wNd

Do you think she should do time for pump faking?