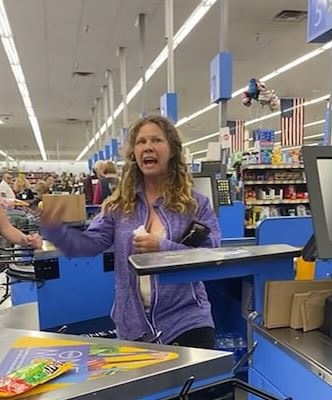 A disgruntled California woman recently took the phrase “so nasty, so rude” to new levels of EWWWW, angrily coughing and spitting all over Walmart employees in a disgusting check-out line disaster.

Police swooped down on a Yreka, CA Walmart late last week, responding to calls about an unnamed shopper’s phlegm-fueled rage against the store’s clerk and manager.

Per visuals of the incident, obtained by TMZ, the woman felt she was being overcharged for her items at the register.

When sis attempted to steal a glance at the cashier’s check-out screen, the corona-conscious clerk asked the woman to back away from her and the store’s equipment.

Flying off the hinges, ol’ girl angrily snapped on the cashier, prompting the manager to step in and settle the situation. However, the wild woman grew even more upset by the manager’s intervention, and began coughing and spitting in his direction.

The boys in blue eventually pulled up on the spitty-scene and escorted the woman out of the store. It’s unclear whether she was arrested.