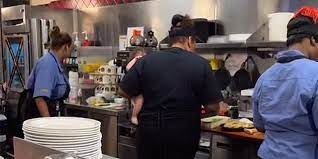 Last weekend a TikTok video went viral of a Waffle House worker holding a baby while helping the cooks. According to TMZ, they were contacted by someone who claimed to be the worker, but turns out it was all a scam to get money.

TikTok user @kizzle260 shared the clip of Tiffany Clark last weekend, writing: ‘Ain’t know why she got her baby in here smh.’  Once the clip went viral, someone wrote in the comments pretending to be Clark. The scammer also wrote TMZ and they say the person shared a tragic story that explained why she was holding the baby in the video.

TMZ also said this person claimed that the baby was her niece and she belonged to her dead brother. The imposter even took it a step further and said that Waffle House suspended her for a week while offering her cash app to the supporters in the comments. After some research, TMZ found out that all of it was a lie. Njeri Boss who’s the VP of Public Relations for Waffle House told TMZ, “they have determined that the media portrayals and social media posts are not accurate.

Boss went on to say, “While an employee of ours was recorded holding a baby at work, she is not related to that baby in any manner, never identified herself as the person in the TikTok video, never provided a CashApp account to receive any donations, never gave an interview to any media outlet, and never was suspended from her job.”

The fake TikTok page is still active and so far has gained 14,000 followers.