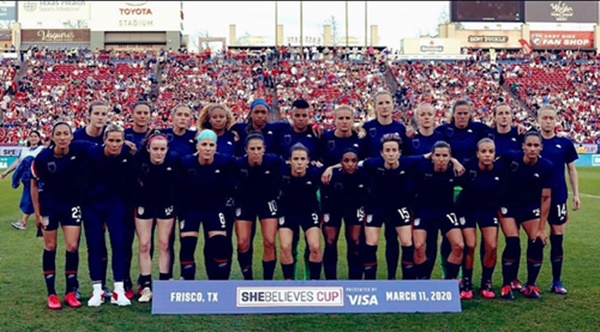 Let’s be honest, when it comes to the United States, we do not know too much about the soccer teams. However, we do know that women keep on winning.

Knowing that you would think that women would make as much if not even more than the men. Far from it.

“A comparison of the WNT and MNT pay shows that if each team played 20 friendlies in a year and each team won all twenty friendlies, female WNT players would earn a maximum of $99,000 or $4,950 per game, while similarly situated male MNT players would earn an average of $263,320 or $13,166 per game against the various levels of competition they would face. A 20-game winning top tier WNT player would earn only 38% of the compensation of a similarly situated MNT player.”

Obviously, the women are not happy about that salary difference. Therefore, in March 2019, every single one of them sued the Soccer Federation for gender discrimination.

On Monday, the Soccer Federation filed their argument to the court claiming that they had not violated the Equal Pay Act. According to Sportznet, they feel “the job of MNT player carries more responsibility within U.S. Soccer than the job of WNT player, from an EPA standpoint.”

The women have won four World Cups and four Olympic gold medals, and the men have won none.

The federation argues that the more people watch the men’s games than the ones played by women. They also argue the men bring in more money and that is why they should get more.

“This ridiculous ‘argument’ belongs in the Paleolithic Era. It sounds as if it has been made by a caveman.

“Literally everyone in the world understands that an argument that male players ‘have more responsibility’ is just plain simple sexism an illustrates the very gender discrimination that caused us to file this lawsuit to begin with.

“So looking forward to trial on May 5.”

May 5, 2020, is the start of their trial date. Mark your calendars because we are not going to want to miss this.

Talking about karma, the US Soccer announced this today.