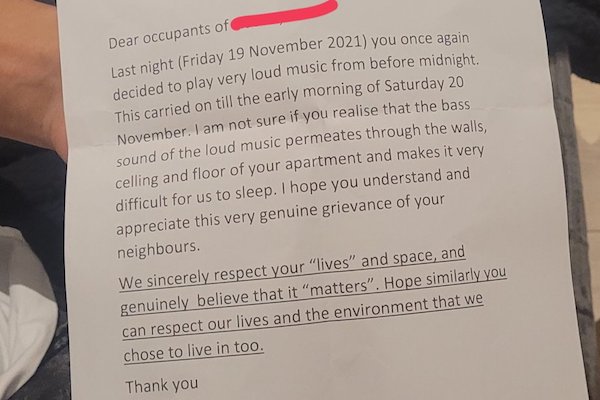 A man took to Twitter to ask users if they thought the note a neighbor left on his friend’s door was racist, and people have spoken: yup. Many think the letter’s last part was an attempt to passive-aggressively mock the Black Lives Matter movement.

This weekend, a user named @ElPapiShow posted a picture of the two-paragraph note, which explains the receiver was being too loud with their music and disrupting their neighbors. It begins with a very polite tone, saying “I hope you understand and appreciate this very genuine grievance”.

But then it takes a turn, with the next part being underlined… “We sincerely respect your ‘lives’ and space and genuinely believe that it ‘matters’.” That’s what people are having a problem with.

Many are saying the last part alluding to BLM was unnecessary and the message could have gotten across just fine without it. Others encouraged them to continue blasting music as a petty payback.

Clique, swipe to see reactions to this letter!