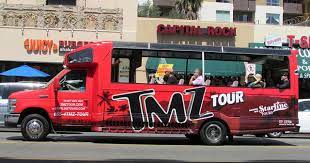 TMZ had to handle one of their employees due all because he chose violence against a black man calling him the N-word and the accuser recorded him on video on his racist rant.

The incident took place Saturday at a gas station in Los Angeles. Now keep in mind the actually incident itself wasn’t caught on video but what happened afterwards between driver and the accuser who claims he called him the racial slur. That man posted the encounter on Twitter “This @TMZ tour bus driver called me a n—-r. Black people should avoid using this company.”

In the video you can see the the bus driver confirm that he indeed did call the man the N-word as they exchanged words, “You called me a n—-r. Did he call me a n—-r?” “Yeah, yeah,” the driver repeatedly stated. “Yeah, I did!” The driver was also yelling, “Touch me. I’ll f–king sue your ass.”

The media outlet responded quickly to the incident and claims that the driver had been immediately terminated. Although the driver did not work directly with TMZ, in an article posted to the company’s site it said, “The TMZ tour was not in progress at the time, nor were there passengers onboard, when the incident happened Saturday morning,””The driver was not an employee of TMZ — he worked for Exclusive Livery Service, the company that owns the bus which TMZ leases.”

The entertainment news outlet also added, “We have been in contact with the owner of the bus company, who tells us the driver was swiftly fired for his intolerable conduct.”