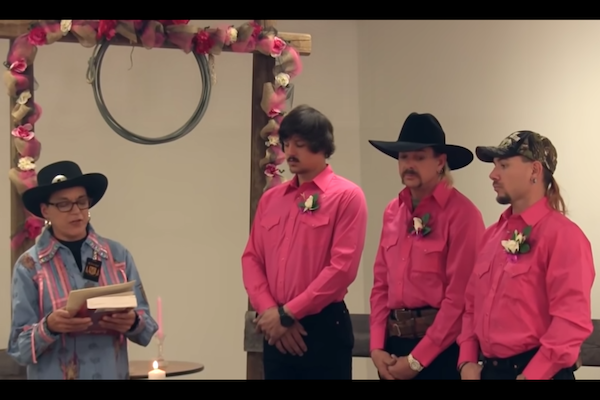 Joe Exotic‘s ex-husband John Finlay claims that their gay 3-way wedding was fake in an exclusive interview that he did with The Sun.

The 37-year-old spoke with the publication about his regrets about the Tiger King and about how he has turned his life around and is now married to a woman. He and his wife Stormey tied the knot recently and lived a rural life in Oklahoma.

My fake wedding didn’t feel right at all. This is a totally different feeling. The fake one was basically a publicity stunt so Joe could get his own reality TV series. This one was the real thing,” Finlay said, talking about the ceremony that appeared in the documentary, where he, Exotic, and Travis Maldonado exchanged vows in pink shirts.

John said that he started working at the zoo as a “young and dumb” teenager, but insists that Joe didn’t groom him and that he was just confused and trying new things.

He also talked about how he is trying to “get rid of old memories” by removing four Joe tattoos, but that it is expensive. The biggest one, that said “Privately Owned By Joe Exotic” right above his crotch, has been covered already.

“I didn’t really have a sex life at all. Then I got it covered, and it was a whole different story. It’s bad when you’ve got someone’s name tattooed down there right next to your private area.”

Finley explained that Stormey, who he met on a dating app a year before the documentary aired on Netflix, embraced his past when he told her about it.

I still wanted to meet because I only care about who he is now, not who he was then. We’ve both had other relationships, but this is the first time it’s real,” Stormey told the publication.

Clique, what do you think about this?