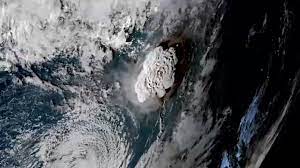 Tsunami Advisory In Effect For U.S. West Coast After Volcanic

If it’s the end of the world just say that, as a tsunami advisory went into effect for the West Coast and Alaska after a volcano erupted in the pacific.  Satellite footage caught one of the most violent volcano eruptions ever, following the Hunga Tonga–Hunga Haʻapai underwater volcano near Tonga. The boom from the volcano […]Read More