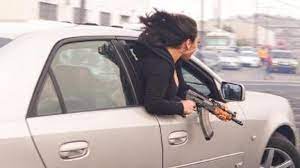 Woman Captured In A Photo Leaning Out Of A Vehicle

In an outrageous photo released by San Francisco police, it captures a woman leaning out of the window of a moving vehicle holding an AK-47. It appears that this was happening during an illegal drag racing event last month.   The woman in the photo identity hasn’t been released as of yet. But, she’s seen leaving […]Read More