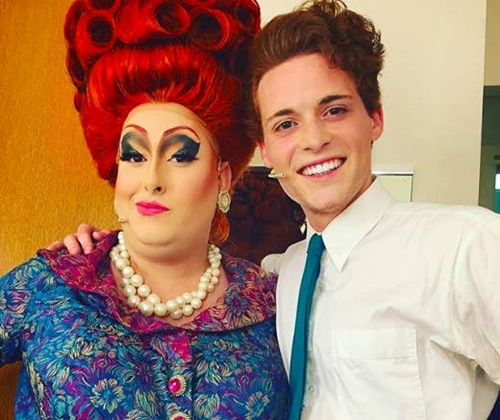 Joey Gugliemelli aka Sherry Pie from season 12 of RuPaul’s Drag Race has been accused by several different men of leading them on as a casting agent. Gugliemelli created a fake email account and spoke to the men as someone named Allison Mossie.

According to Buzzfeed News, the victims are ex-classmates from SUNY Cortland in New York, and actors he worked with at a Nebraska theater company.

David Newman, a former classmate, said that Gugliemelli filmed him wearing a tank top and shorts for an audition for the fake musical version “A Nightmare Before Christmas.” There was no fake musical. Gugliemelli never apologized for taking advantage of him.

Ben Shimkus was the first victim to come forward and he did so via a Facebook post. He says that a friend told him that someone named Allison Mossie was casting a play, and gave him the information. Shimkus communicated with Mossie aka Gugliemelli in over 150 emails. He even says that he filmed

“scenes that felt particularly sexual and awkward, but the opportunity seemed too good to let the overt sexual nature or my inhibitions get in the way. “

Eventually, Shmikus became suspicious and asked his friend who told him about Mossie. The friend revealed that it was Sherry Pie who gave him the information. Several other people told him the same thing.

At some point, Gugliemelli wound up in Nebraska and taking advantage of men there. Josh Lillyman’s story is the most shocking one of them all.

“As he prepared to shoot his final tape, Gugliemelli offered to come over to film Lillyman. The shoot lasted three to four hours, Lillyman said, as Gugliemelli continued to offer direction. According to Lillyman, Gugliemelli suggested eventually he take off his shirt, flex, and even strip down to his underpants in order to get into character. ‘He was trying to get me to go further,” said Lillyman. ‘He kept saying it’s not quite right’

“When he emerged, Gugliemelli suggested he do it again on camera. It was only the casting director who would see it, Lillyman thought. Again, he did as he was told.”

Later on, Lillyman heard Landon Summers discussing that he too was auditioning for the same show. Summers was told that things were looking good for him getting the part. So much so, that Summers was considering turning down a job on a Disney Cruise Ship. Before he did, Sherry Pie left town and Summers never heard from Mossie again. Summers did not turn down the cruise.

Yesterday, after the story went public, Gugliemelli apologized for what he did on Facebook.

Today, VH1 announced that Sherry Pie has been disqualified from the show.

“In light of recent developments and Sherry Pie’s statement, Sherry Pie has been disqualified from RuPaul’s Drag Race. Out of respect for the hard work of the other queens, VH1 will air the season as planned.  Sherry will not appear in the grand finale scheduled to be filmed later this spring.”

spokesperson for VH1 and World of Wonder