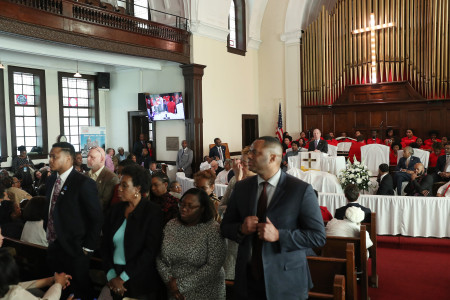 Literally standing and turning their backs on the former New York City mayor, they showed no love as he discussed voter suppression and the fight for civil rights. Ten minutes into his speech, attendees began to rise and turn around…and stayed that way throughout the whole duration of his remarks.

Alabama is one of 14 states that are preparing to vote on March 3. It will be Bloomberg’s first time on the ballot. Bloomberg was introduced by Reverend Leodis Strong, one of the pastors of the historic church which served as a focal point of the civil rights movement.

Strong recalled initially inviting Bloomberg to visit the church but said he declined the request, citing his campaign schedule. Strong did appear to commend the mayor for reconsidering and accepting the invitation.

“Let me just say this. I think it’s important that he came,” Strong said. “And it shows a willingness on his part to change. And I like that, and I think that that is important.”

Y’all know those politicians love to come and try to “fit in”? We Stan!