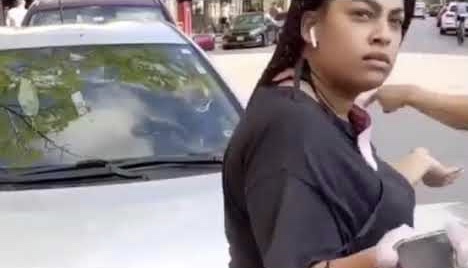 A GrubHub driver is currently in police custody after running over a Chicago restaurant worker during a heated social distancing debate.

Bijan Early, 24, suffered multiple broken bones and was placed on a breathing tube after being dragged several feet by her alleged attacker’s Prius outside of her mom Angelita Tanner’s restaurant, Ms. T’s Southern Fried Chicken, Friday.

The unnamed food-delivery driver allegedly became irate with the mother and daughter duo after being instructed to wait to pick up an order for his customer outside of the establishment in accordance with CDC social distancing guidelines.

Unwilling to adhere to the restaurant owner’s request, the driver allegedly hopped out of his car and attempted to kick in the eatery’s front door. Bijan followed the incensed man to his car and informed him she was calling for police assistance. He then hit the young woman with his vehicle, leaving her bloody and bruised as he fled the scene.

The presumed antagonist has turned himself in to Chicago Police. GrubHub has reportedly revoked the driver’s delivery credentials.

Do you think the perp should do jail time, or was getting fried from GrubHub punishment enough?