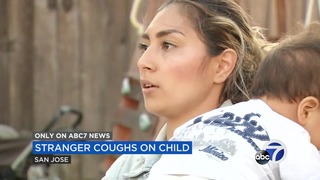 The San Jose Police Department is asking for help identifying a female suspect who deliberately coughed on a baby at a restaurant following a verbal altercation with the child’s mother.

The incident happened at a Yogurtland when a 60-year-old white female was standing in line in front of a mother and her one-year-old son. The white lady allegedly became upset with the mother for not maintaining proper social distancing.

In a press release from the San Jose Police, Sergeant Enrique Garcia said the angry woman removed her face-mask, got close to the baby, and coughed 2-3 times.

“I believe this woman may be racist because the family in front of her is white. Me and my grandma are Hispanic and she started telling me about my distance and harassing me and my son once I started speaking Spanish to my grandma,” said Mireya Mora, the mother of the one-year-old.

Mora said her son had a slight fever after the coughing incident but he’s okay and hopeful he won’t contract coronavirus.