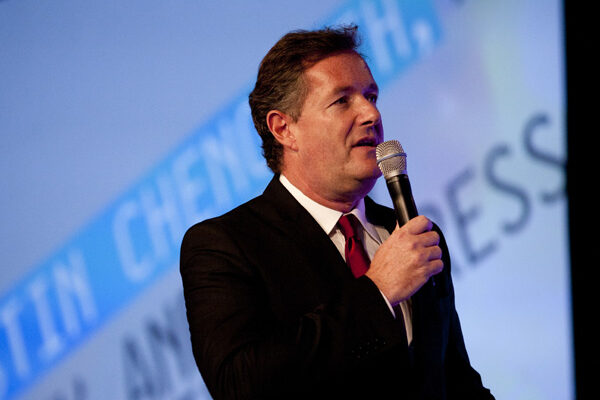 Piers Morgan has spoken up in his first interview since his exit from “Good Morning Britain” and Sharon Osbourne’s subsequent exit from “The Talk” after backlash for defending him.

He claims Osbourne’s ex co-host Sheryl Underwood should have been fired for calling him racist with no evidence and says Underwood herself has defended racist language in the past.

Morgan appeared on “Tucker Carlson Today” and lamented “cancel culture” and said that Sharon’s firing was a deliberate takedown.

When Sharon got annoyed and said, ‘What did he say that was racist,’ they couldn’t say anything because I’ve never have. Now Sharon’s gone too,” he said.

He also called out Underwood for defending comedian George Lopez‘s standup joke about black people on an episode in 2017.

She defended George Lopez on ‘The Talk’ four days later, so there’s a real sickening hypocrisy,” Morgan said.  “I’m staggered. Sheryl Underwood is still on that show. How can you be on a show when you forcibly brand someone a racist? And when you’re challenged about it, you can’t produce any evidence? “Isn’t that by the Sharon Osbourne scale of dismissal a fireable offense? I’d said so. But there lies the hypocrisy at the heart of this debate.”

“The Talk” has been on a hiatus since this fiasco broke last month, and an insider told The Sun that it may be getting axed completely.

Clique, do you think Sheryl should be fired? Or should they throw the whole show away at this point?