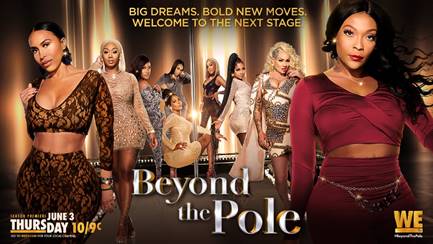 Beyond The Pole is back for another run and season 2 added a few new ladies to the mix. Onsite caught up with Lyric and Gigi Maguire to discuss the new season amongst a bunch of other things.

Both ladies expressed their love for filming the show as well as their excitement for the premiere; however, they admitted it was a handful due to the pandemic. The ladies said that filming was

due to COVID-19 protocols such as constantly being tested; yet the women managed to get through it and filmed a successful season.

Overall, both Lyric, and Maguire’s motivation behind participating in the show was to share their story as previous dancers as well as allowing the audience to gain a peak into their personal lives. Both ladies also mentioned it’s important for a dancer’s life to be showcased in a different light because the lifestyle is often prejudged and viewed as negative or distasteful through societies lenses.

Maguire said as a former dancer, she has been forced to defend fellow dancers who derived from a similar background as her. She told Onsite it was important for her to help change the narrative of how a dancer is viewed in society.

“We are here to change the narrative. We are here to let people know, we are mothers, we are women, we are educated, we are homeowners, we are business owners, we are entrepreneurs, we take care of ourselves in [big] ways and everybody else around us. I am super here to push that, so people can see, even though we strip naked to make our money. . . we are still real women, and we still have everyday issues like everybody else.”

Lyric said she felt this opportunity was presented at the right time which her faith led her to. She told Onsite,

“I’ve been creatively writing for a long time. . I’ve always [written] down different things that I was going to do, so this was something that I’ve been trying to do for about 15 years.”

She mentioned that she’s always gotten opportunities however, she felt this was the right one. She continued,

“it was about the [opportunity] that God wanted me to do.”

#Clique, don’t forget to tune into Beyond the Pole on Wetv.