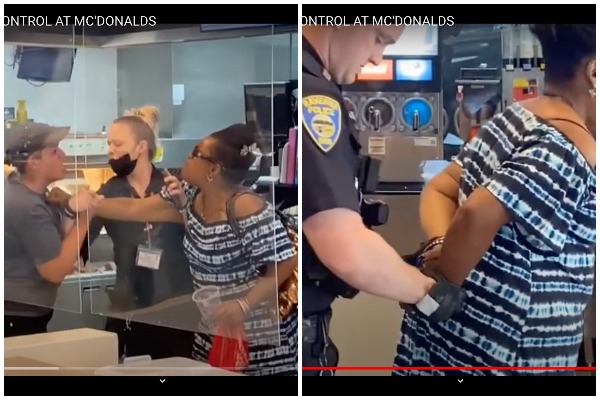 A woman in Ohio was arrested after trying to fight McDonald’s employees over a slushie. She was reportedly mad that they would not mix three flavors together, and an argument ensued, which turned into punches being thrown.

Customer Brian Allen caught the entire ordeal on video and told news station WOIO that it began when they refused her drink request and she wouldn’t let it go.

“The manager informed her that they could not do that, and she became increasingly irritated and combative and decided that she would go behind the counter and fix her own drink,” he said.

The video starts with the woman, who was identified as Cherysse Helena Cleveland, holding a drink cup behind the counter and shoving two workers, one of whom warns her “Don’t touch me; I’ll destroy you,” and warns her she could go to jail.

Then, Cleveland exits from behind the counter, goes to put in her cup, and tried to go back. When the employee tries to block her, she throws the ice at her and all hell breaks loose. Cleveland swings at her, but the worker ends up pinning her on the ground and punching her a few times.

Cops eventually showed up and hauled her to jail for misdemeanor assault.

Clique, would you go this far for a slushie?