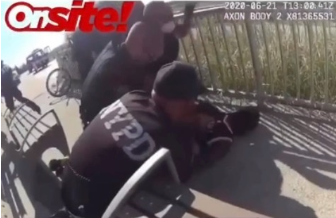 The NYPD is investigating an incident involving an officer using a banned chokehold during an arrest in Queens.

In a recently released body camera video, a group of men is seen arguing with police before a Black man is arrested.

During the man’s detainment, one officer can be seen on top of him using a chokehold.

“This matter is taken extremely seriously and we expect to have an update this evening as the investigation unfolds,” the NYPD wrote in a statement.

NYPD Commissioner Dermot Shea later announced the decision by the department to suspend the officer.