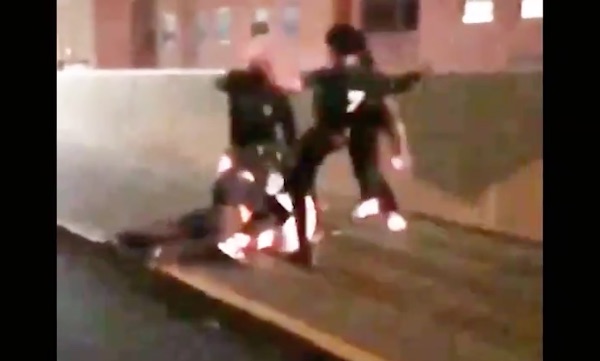 A high school basketball coach at Malcolm X Shabazz H.S. in Newark, N.J. was violently attacked outside of his school by his own team in a disturbing video.

Police say the teens jumped the coach after getting off the team bus, returning from a road game. The reason could be speculated but has not been confirmed by authorities. A criminal investigation is now underway.

Police say at around 9 pm Tuesday, they responded to a call at Malcolm X Shabazz H.S. in Newark, N.J. regarding an assault of a school employee. Multiple reports identify the victim as a coach on the basketball team.

The victim was repeatedly kicked and punched by at least four people but reportedly declined medical attention when ambulances arrived. Police say after viewing the footage, they were able to identify the attackers as members of the school’s basketball team. However, they cannot release the names of the suspects because they’re all minors.

“Our detectives are investigating this incident to identify and to appropriately charge those individuals involved. Those found to have participated in this senseless act of violence will face criminal charges.”

“The actions of these students will not be tolerated.”