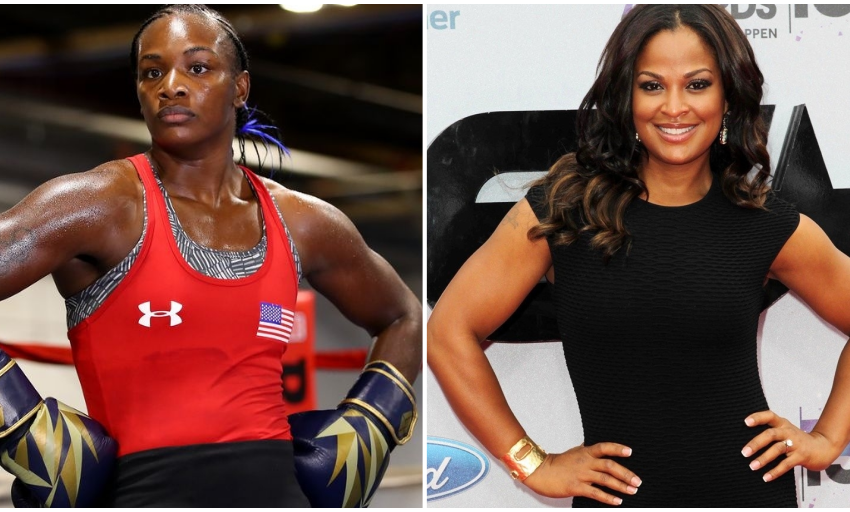 Back in January, Laila Ali was asked her opinion on Claressa Shields on “Sway In The Morning,” which resulted in an exchange via their DMs.

Shields and Ali had a texting friendship for years, and the younger boxer claims she would ask her for business not boxing advice. However, something changed and the two of them became opponents through the media.

Back when it all started in January, Shields reached out via DM and explained that she never said that Ali was a bad boxer or businesswoman. In that private message to Ali, she expressed how she felt.

“We can always talk or meet and figure it out.

“I always feel like I could beat you in a fight. As you feel you can beat me in a fight. That’s never gonna change. But that don’t mean we have to hate each other.”

For nearly two months, Sheilds says that Ali was Twitter silent. Then earlier this month, she finally responded to Shields.

“You are a punk and talking all that sh!t pubically, but trying to make nice in private.

“You remind me of Ann Wolfe’s coward a$$. But at least you’re willing to get in the ring.

“I’m gonna teach you a whole lot of things that will make you a better fighter.

Lesson #1. Learn to shut your mouth. About the money being there. It’s not there, it’s in the escrow account.

“You can keep acting like you’re the victim, if you want to.

“I called you out, but we both know you ran your mouth, about something you don’t really want in your heart. You don’t know what you are talking about. I can see right through.

“So just be patient. Now hopefully you will have the opportunity to try and knock me out. Even though you’re not even hurting the soft girls you had been figthing.

Shields couldn’t take that lying down, so she did what she does best and ran her mouth some more.

“I heard your goods on Sway. But the energy is the same. Trust me, I am not scared of you. Never have, never will be.

“I felt bad because I see how the Ann Wolfe comment almost made you cry.

“But this wasn’t a race to squash beefs. You said on Sway that I said you weren’t a good businesswoman. I never said. I said I’m a way better boxer than you, and I meant it.

I hope you come out of retirement because I’m going to show you that the game has changed, and why I say I am the ‘GWOAT,’ sweetie. See you in the ring”

Will they take their words to the ring? The only thing holding their fight back is money. Bleacher Report says that Ali wants $5 million, but Shields said they will never get that much money. Shields says that when Ali comes up with a realistic number than the GOAT and the GWOAT can box it out.

“There’s a lot of talk about the financial requirements, and that’s always an important part of every deal.

“But I think it’s real. Certainly I know from Claressa she would love the opportunity, and everything that I’ve heard and read it’s a realistic possibility from Laila’s side. I think that’s certainly the biggest fight that can be made.”

Espinoza sounds like he’s interested in bringing their match to Showtime. Hopefully, he can work out a deal with them. It would be the fight of the century in Women’s Boxing. If it happens.

People believe that Ali has two things against her. First, she is 42, while Shields is only 25. Second, Ali hasn’t competed since 2007. Then again, she is Muhammad Ali’s daughter and nothing could stop him and nothing has stopped Laila either.

Who would you bet on in this fight?