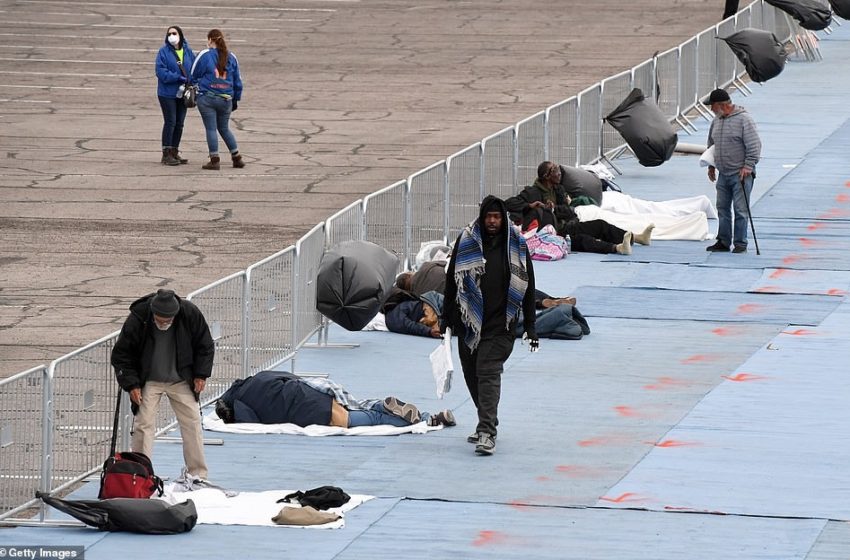 The homeless of Las Vegas are being housed in a parking lot pop-up shelter.

After a homeless man residing at the Catholic Charities of Southern Nevada housing facility tested positive for coronavirus last week, the center was forced to close, leaving 500 homeless people in search for refuge, according to CNN.

With neighboring homeless shelters at capacity amid the Covid-19 outbreak, the City of Las Vegas and Clark County fashioned a makeshift sanctum for the homeless in the parking lot of Cashman Center, a baseball stadium complex, over the weekend.

Due to a shortage of beds and sleeping mats—and after a failed attempt to substitute carpet for sanitary cushioning—officials overseeing the impromptu provisions instructed volunteers to paint white boxes on the concrete, spaced six feet apart, for the homeless to use as their individual sleeping areas.

While members of the homeless population were reportedly grateful for the accommodations, despite however meager, Twitter users were outraged by the scene after images of the homeless sleeping on the ground went viral Monday.

“Horrid! Evidence of a failed society that cannot provide for its citizens the most basic of human needs,” a incensed social media critic said.

“Las Vegas is putting homeless people in parking lots while the city’s hotels are completely empty. For some reason, this photo sums up for me everything that is wrong with this country & its response to the COVID-19 crisis,” another online condemnation read.

Nevada, a state in one of the richest countries in the world, has painted social-distancing boxes on a concrete parking lot for the homeless to sleep in. pic.twitter.com/svNJ0N9r3f

In response to the backlash, Las Vegas officials reportedly said the city and Clark County are doing the best they can to deal with a situation that was thrust upon them when Catholic Charities were forced ton close its facility.

Catholic Charities plans to open its shelter by mid-week, at which point the temporary parking lot shelter will close.