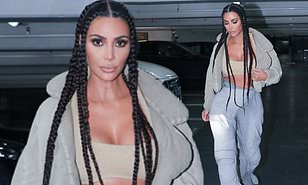 Probably the most infamous “culture vulture” of all time, Kim Kardashian, is in hot water again after rocking braids to her husband, Kanye West’ Yeezy show during Paris Fashion Week.

Kim shared several pics of herself from the show on her social media, with a head full of jet black, waist-length braids that matched her 6-year-old daughter North West’s and her 7-year-old niece, Penelope Disick. Of course, Black Twitter had a field day with the comments and opinions about Kim’s choice of hairstyle. One person tweeted,

“You think she’d learn. Put your hair up in a high pony and go to the fashion show like everyone else.”

But not everyone was offended. Someone else tweeted,

“It’s 2020 we know it’s y’all culture. It’s a badass hairstyle and you don’t control the hands that braid it. On top of that, this is only an American issue. No one on earth besides African Americans deem this cultural appropriation.”

This obviously isn’t the first time Kim has faced backlash for her hairstyles. In a 2018 Bustle interview, she addressed the issue, saying,

“I [do] remember the backlash when I had the blonde hair and that I called them ‘Bo Derek braids.’ But I obviously know they’re called Fulani braids and I know the origin of where they came from and I’m totally respectful of that. I’m not tone deaf to where I don’t get it. I do get it…In no way am I ever trying to disrespect anyone’s culture by wearing braids.”

Once and for all: Is Kim Kardashian guilty of cultural appropriation? Or does sis just really like wearing braids? What do y’all say?