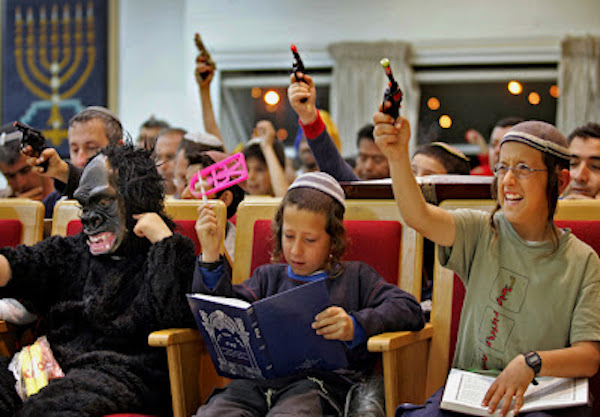 Israeli children, one wearing a Purim costume use toy guns and a rattle to make noise during the reading of the Biblical book of Esther in the synagogue in the Jewish settlement of Neve Dekalim in the Gaza Strip Thursday March 24, 2005. Israeli Prime Minister Ariel Sharon plans to evacuate all 21 Jewish settlements in the Gaza Strip and four in the West Bank over the summer, and settlers have vowed to disrupt the process.(AP Photo/Baz Ratner)

A college student in Brooklyn has been arrested after spitting on three Jewish children and yelling anti-Semitic things at them, Daily Mail report.

Christina Darling, 21, allegedly walked up to a trio of siblings, aged eight, seven, and two, and told them, “Hitler should have killed you all. I’ll kill you and know where you live,” and then spit on them.

She has been charged with aggravated harassment as a hate crime, endangering the welfare of a child, and menacing for the January 14 incident.

A petition has started to have Darling, who is a psychology student at St. Francis College, be expelled from the university.

Clique, what is wrong with people?