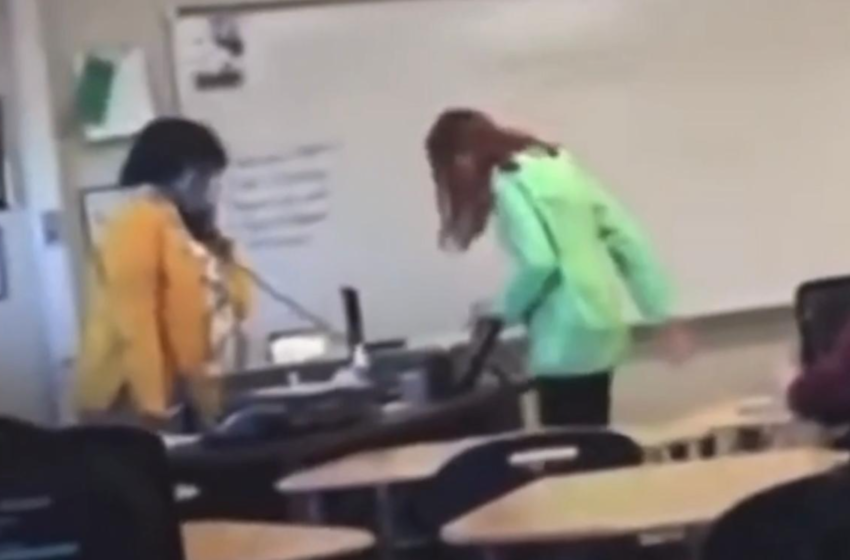 A viral video of a Texas high school student physically attacking a teacher and then calling her mom to make racially motivated comments has gone viral. The video has been making its way throughout social media, as the student is seen hitting the teacher after she stormed up to the teacher’s desk.

The incident occurred at Castleberry High School in Fort Worth. The girl walks up to the teacher’s desk, who appeared to be on the phone, and tells the instructor,

She went on to abruptly end the teacher’s phone call. The teacher tried to regulate; however, she is slapped by the student. Shortly after, the teacher appears to go in the hallway to seek aid. The student went on to call her mom, as she says,

“I need you to get over here now because this teacher is about to get f–ked up if she doesn’t get the f–k away from me ….You want to talk to her because she’s black, and she’s f–king pissing me off right now.”

The student then tossed the phone at the teacher and walked off. School district officials responded to the incident admitting to being “greatly disturbed” by what transpired. The statement continued,

“We first want to commend the teacher for the calm demeanor and utter professionalism she demonstrated throughout the entirety of the incident, even when the situation turned violent and offensive …. We support this teacher and her response in the strongest terms possible.”

“Harassment, racism, and violence against our teachers will not be tolerated at Castleberry ISD, and we will take swift and effective action to protect our teachers so that they can perform their duties and educate students in a safe environment.”

According to the New York Post, the school district has contacted officials about the encounter.