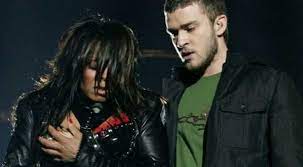 The saga continues as one of the most talked about moments in pop culture and Super Bowl history has resurfaced. The New York Times has released a documentary that details the wardrobe malfunction during a performance with Justin Timberlake. It dissects the incident and what happened afterwards that has fans hash tagging justice for Janet.

The documentary is centered around the controversy of the Super Bowl halftime show on 2004. If you guys remember, at the end the singer had one of her breasts exposed for Justin ripping off a piece of her outfit. The documentary basically suggests that the iconic pop star got all of the backlash from the incident and putting no blame on Timberlake. The fans who had a chance to watch weren’t having it and sounded off on Twitter.

#justiceforjanet started trending and the people weren’t holding back! Also the fans believe and so does the documentary suggest that the controversy had a helping hand by former CBS chairman and CEO Les Moonves. The film also implies that the idea for the stunt came from Janet herself or someone on her staff.

Check out the trailer below.