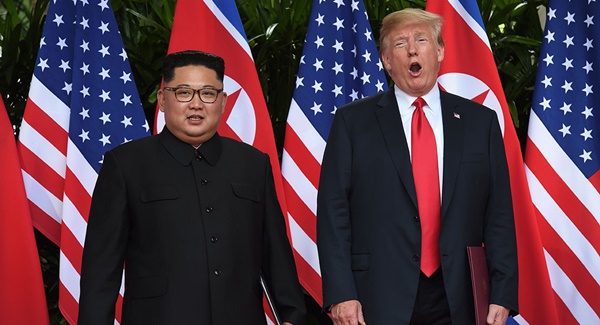 Anyone who has been on social media in the last week has seen that medical professionals from all over the United States are begging for basic medical supplies to immediately get them through Coronavirus. They are asking Donald Trump for help. Instead, he sent a letter to Kim Jong-un offering to help North Korea with “anti-epidemic work.”

According to CNN, Trump sent a letter to the dictator and the Korean Central News Agency confirmed some of the details.

In the letter, Trump “explained his plan to propel the relations between the two countries of the DPRK and the U.S. and expressed his intent to render cooperation in the anti-epidemic work, saying that he was impressed by the efforts made by the Chairman to defend his people from the serious threat of the epidemic…

“We regard it as a good judgment and proper action for the U.S. president to make efforts to keep the good relations he had with our Chairman by sending a personal letter again at a time as now when big difficulties and challenges lie in the way of developing the bilateral relations, and think that this should be highly estimated,”

Jong-un has yet to respond to the letter.

We also have not heard from any of the U.S. Governors on how they feel about his offer to assist another country before his own. They have pleaded for the government’s help them to get through this crisis with life-saving items like masks, protective gear, and ventilators that are on very short supply? All they heard was Trump’s message to them at one of his daily press conferences.

“The Federal government is not supposed to be out there buying vast amounts of items and then shipping. You know, we’re not a shipping clerk.”