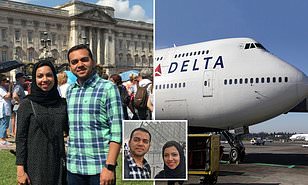 Delta Air Lines is being fined $50,000 by the Department of Transportation after ordering three Muslim passengers off of planes after they had been cleared to travel by the airline’s own security team. The department claimed Delta violated anti-bias laws by removing the passengers in two separate incidents and ordered the airline to provide cultural-sensitivity training to the employees who were involved.

The first incident took place in July before a U.S.-bound flight from Paris. A passenger told a flight attendant that a couple, a man and a woman wearing a headscarf, was making them nervous. The flight attendant reported walking by and seeing the men write “Allah” several times while texting. Delta security interviewed the couple outside the plane at the captain’s request. The couple, U.S. citizens from Cincinnati, “raised no red flags” and was cleared to fly but the captain refused to let them reboard. The flight left without them and they flew home the next day.

The second incident happened prior to a flight from Amsterdam to New York. Passengers and flight attendants complained about a Muslim passenger who had already been cleared by Delta’s security office. The captain went to the gate and had the man and his bags removed from the plane and the area near his seat searched.