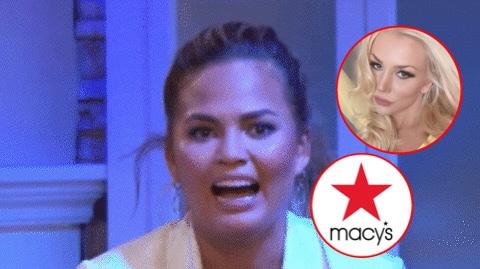 Be careful what you put on the internet because it may come back to bite you where it hurts the most and in Chrissy Teigen’s case, it’s her pockets. Teigen’s craving cookware line has reportedly been pulled from the Macy’s website, per The Sun.

According to Radar, the cookware line was pulled after Teigen admitted to

“an abused minor who was married to a predator.”

In 2011, the former model made her hatred for Stodden public, while Stodden was only 16. She tweeted that she wished Stodden would

“Stodden alleged Teigen would also urge them to commit suicide in private messages.”

“Not a lot of people are lucky enough to be held accountable for all their past bulls–t in front of the entire world. I’m mortified and sad at who I used to be. I was an insecure, attention seeking troll. I am ashamed and completely embarrassed at my behavior but that is nothing compared to how I made Courtney feel, ”

“I want to also publicly apologize. I’m so sorry, Courtney. I hope you can heal now knowing how deeply sorry I am. And I am so sorry I let you guys down.”