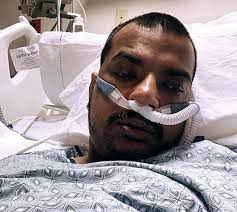 A God fearing man who attends the Hillsong megachurch spoke way too soon about not being vaccinated because he has since died from Covid-19 a month later.

34 year-old Stephen Harmon, took to Twitter to voice his opinions on the vaccine back in June. He used Jay-Z’s song and put a spin on the lyrics and tweeted, “If you’re having email problems, I feel bad for you, son,”. I got 99 problems but a vax ain’t one.” A month later he was in the hospital battling the virus which he died from on Wednesday.

The megachurch pastor, pastor Brian Houston announced his death via social media sharing a heartfelt caption about Harmon, “Stephen was just a young man in his early 30’s. He was a graduate from Hillsong College and a vital part of our church in California. He was one of the most generous people I know and he had so much in front of him. He would always turn up to our grandkids soccer games and he will be missed by so many. RIP.”

Harmon’s social media pages has since been made made private. He made many tweets that involved his stance on the vaccine and eventually began to tweet about his condition and the treatment he was receiving.