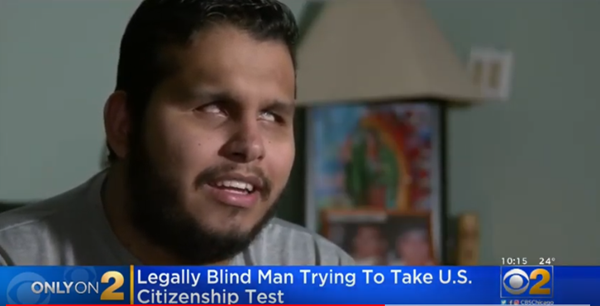 Ever since Lucio Delgado came to America from Mexico six years ago to get the education he couldn’t get there, he has wanted to become a US citizen. He learned English by listening to the radio and studied hard for the test.

That day finally came in May. Delgado was ready to take the test. When he got to the part where he needed to read a sentence in English, he was not able to do it. Not because he cannot read the language. He cannot see the words on paper because he was born blind.

Delgado told the test takers at US Citizenship and Immigration Services (USCIS) that he is blind. He says they told him that he needs a doctor’s note from an ophthalmologist saying that if he wants to waive that part of the test.

Since he does not have health insurance, he couldn’t get the note. Without that note, he got one from USCIS saying he was denied citizenship.

USCIS in a letter to Lucio Delgado

Delgado sat down with CBS Chicago and told Charles De Mar how that makes him feel.

“To receive such negative news it shattered all of my dreams in one second.”

His dream is not over. His pro-bono lawyer Darcy Kriha told The Washington Post that USCIS has since contacted Delgado to tell him he can take the test again on March 13th.