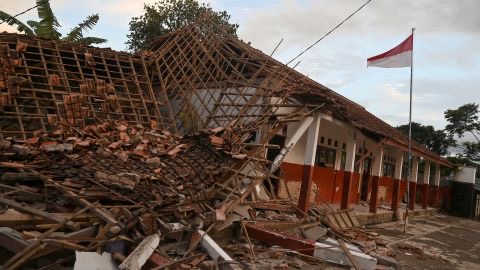 In Indonesia’s Cianjur region in West Java, a 5.6-magnitude earthquake occurred, with a depth of 10 kilometers (6.2 miles). Within hours of the initial quake taking place, 25 aftershocks were recorded, causing major landslides, as reported by NBC News.

As of now, an estimated 700 people have been injured and 172 people have lost their lives. According to local office of the National Agency for Disaster Management, 52 houses and 4 schools have been destroyed, and 2,345 homes have been greatly damaged, leaving 13,782 displaced. All will be accommodated in the 14 refugee sites being built by the Indonesian government.

“There are still many residents trapped at the incident sites,” said West Java Governor Ridwan Kamil. “We assume that the injured and dead victims will continue to increase over time.”

More buildings are now being assembled by government officials in order to aid victims, including hospitals and more living sanctuaries, as rescue teams continue to search for those who remain missing.