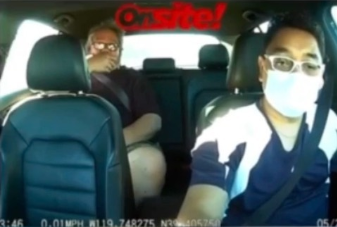 A Lyft passenger started spewing offensive and racist words toward his driver when asked to put on a mask in Las Vegas.

A recently uploaded YouTube video shows the hostile exchange that begins after a passenger tells his driver he doesn’t believe in the coronavirus, according to TMZ.

Despite the driver explaining people in his family contracted the virus, the video shows things escalating as the passenger starts making fun of the driver’s accent and using racial slurs.

At one point the passenger tells the driver that he isn’t an American citizen, saying to the driver, “you’re a wetback” and demanding he abides by a “contract” and takes him home.

The driver ends the ride, refuses to take the passenger any further, and demands he get out or he’ll be forced to call the police.

Lyft told TMZ the rider is banned, and they’re “working with the driver to make sure he’s alright.”