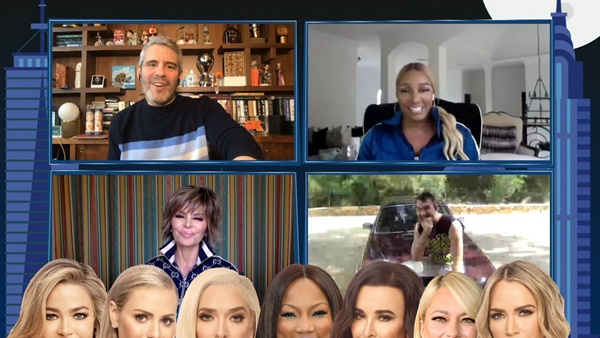 On March 20th Andy Cohen revealed he tested positive for Coronavirus, forcing him to sideline plans to air his nightly live broadcast, ‘Watch What Happens Live.’

In addition to placing WWHL on hiatus due to the  COVID-19 pandemic, Andy had to put a production hold on the ‘Real Housewives‘ franchise.

Since fully recovering from his bout with the virus, the Bravo host sat down with The Hollywood Reporter with an update on his addicting programs.

“I’m watching cuts of New York, Atlanta, Potomac and Beverly Hills right now. I’m about to screen the finale of Atlanta and give notes on that. We’re trying to figure out how we can do this Atlanta reunion, since we hadn’t taped one yet.”

Andy Cohen to The Hollywood Reporter

Is Cohen considering doing the ‘Atlanta‘ reunion show remotely? It is one of the ideas he and the other network executives seem to be considering.

‘Atlanta‘ is not the only show whose production was halted due to being quarantined, so is ‘The Real Housewives of Orange County.’

The RHOC series was reportedly one-third of the way through filming before the disruption of the global health crisis.

Now, Andy says the production company that manages ‘RHOC‘ and ‘The Real Housewives is Beverly Hills‘ is trying to come up with innovative ways to shoot both of them since the housewives casts are still in communication.

When it comes to ‘The Real Housewives of New York,’ which is airing on Bravo now, it will continue showing weekly. Andy says fans have been asking him to post the whole season online for them to binge, but he does not plan on doing that.

The trade magazine also wanted to know if people will still be interested in how the ‘Real Housewives‘ casts spent their time in isolation in a few months.

“I think it will be relatable and different. It will represent a piece of the season, and hopefully we’ll all come out of this and they’ll all come together in person.”

Andy Cohen to The Hollywood Reporter

Do you want to see how the ‘Real Housewives‘ spent their time during the Coronavirus pandemic? I can’t wait to see what they put their poor husbands through during this time.